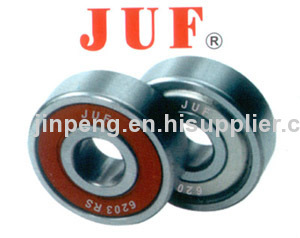 1. SKF
From the company that invented the self-aligning ball bearing 100 years ago, SKF has evolved into a knowledge engineering company that is able to draw on five platforms to create unique solutions for its customers. These platforms include bearings, bearing units, and seals, of course, but extend to other areas including: lubricants and lubrication systems, critical for long bearing life in many applications; mechatronics that combine mechanical and electronics knowledge into systems for more effective linear motion and sensorized solutions; and a full range of services, from design and logistics support to conditioning monitoring and reliability systems.

Overall the SKF brand and the corporation are stronger than ever & stand ready to serve us with world class product competencies, intellectual resources, and the vision to help us succeed.

2. FAG - INA
The FAG brand started with an ingenious idea. In 1883, Friedrich Fischer designed a ball grinding machine in Schweinfurt, Germany that, for the first time, made it possible to produce absolutely round steel balls by grinding. This invention is regarded as the foundation for the entire rolling bearing industry. This is one of the reasons why FAG has long been considered to be a pioneer in rolling bearing technology. Today, FAG is one of the leading brands for applications in machine building, the automotive industry and in aviation and aerospace technology. The Schaeffler Group's FAG brand has companies, subsidiaries and sales agencies in all major industrial countries.
Since 2001, FAG has been part of the Schaeffler Group and has been active in all of the group's divisions - Aerospace, Automotive and Industrial. Together with INA's complementary product range, FAG has one of the widest product portfolios in the rolling bearing industry, covering nearly all applications in production machinery, power transmission and rail technology, heavy industry and consumer products.
FAG ball bearings and roller bearings are manufactured as standard and special bearings in many designs and sizes with diameters ranging from 3 millimeters to 4.25 meters. Together with INA, FAG offers customers comprehensive support and services for the diagnosis, maintenance and mounting of rolling bearings and complete systems.
As a forward-looking company, the Schaeffler Group with its brand FAG has invested significant amounts in research and development. Modern simulation methods and testing facilities as well as special materials engineering laboratories ensure the continuous development and improvement of all product lines and confirm the innovative force of FAG.


3. NSK-RHP
RHP has a long heritage which is respected throughout the world, RHP was formed in 1969 as a result of the government bringing three of the UK's leading bearing manufacturers together. Ransome & Marles founded in Newark England in 1900 or R&M as many people know it soon became the leading British manufacturer of ball & roller bearings. Their reputation for quality gained them world wide acceptance in Aerospace, Defence & precision engineering enviroments. Hoffmann founded in Chelmsford England in 1898. Hoffmann had always been closely associated with high-speed machines & in particular Aero-engine development. The first non-stop flight accros the Atlantic in 1919 by Sir John Alcock was in a Vickers Vimy powered by a Rolls Royce Engine fitted with Hoffmann bearings. The relationship between Hoffmann & Rolls Royce continued through such projects as Sir Malcolm Campbell's water speed record in Bluebird, & John Cobb's land speed records in Railton. Pollard founded in Ferrybridge England in the 1940's. owned by Lord King (later of British Airways fame) Pollard was the third largest bearing company at that time then in 1969 the three major British bearing companies Ransome & Marles, Hoffmann & Pollard were brought together. In 1990 RHP was purchased by NSK founded in 1916 it was the first bearing company to produce ball bearings in Japan.


4. Timken
The first tapered roller bearing was patented in 1802 by a French inventor, M. Cardinet. Little progress was made during the next 80 years.
But near the close of the nineteenth century, Henry Timken, a successful carriage builder in St. Louis for many years, made his first drawing of the tapered roller bearing. It resulted from his search for the bearing that would best withstand the rugged service in carriage and wagon wheels.
1898 Henry Timken and R. Heinzelman took out a patent on June 28, 1898 for a tapered roller bearing mounted in the wheel hub of horse-drawn vehicles. This early design of the Timken bearing consited of a full set of rollers but no cage or retainer. Rollers were held in alignment by two grooves cut into the rollers which engaged mating ridges on the cone. Contact of the wall of the groove in the roller with the edge of the cone was in a straight line. Henry Timken's two sons, Henry and William, formed The Timken Roller Bearing Axle Company in 1899, and, in 1901, moved the business to Canton, Ohio. Research and development of the Timken tapered roller bearing have never ended.
1901 The next big improvement came with the addition of retainers to hold the rollers in assembly with the cone. This Timken bearing featured a built-up cage with end rings tied together with pins. The function of the cage was to prevent rollers from rubbing against one another and to hold the rollers in alinment. With the automobile industry's adoption of this bearing, outer cups or raceways were first introduced with it. Success of the new bearing was immediate. And with growth of the automobile industry, demand for the new tapered roller bearing grew.
1907 An important advance was the use of a one piece, pressed steel cage which eliminated the pintles on the ends of the rollers. The cage both guided and spaced the rollers about the cone, kept rollers aligned. It helped reduce friction, permitted higher bearing speeds, increased bearing life.
1910 This more compact bearing marked a new step forward. Because the bearing could be mounted in smaller space, engineers could include it in more positions in automobiles, trucks and tractors. Wings on the cage guided the rollers and kept them properly aligned. The flange at the smaller end of the rollers as well as the wings extending along the rollers was turned in. Outer edge of the cage was crimped to get close running tolerances between rollers and cage.
1917-1918 Here was a major development in simplifying the design of the Timken bearing through elimination of flanges on each end of the cage and along the length of the rollers. Cage pockets were punched out to provide a close fit along the rollers and keep them properly spaced and aligned on the cone. Bearing width was reduced even more without sacrificing load-carrying capacity, by removing the nib from the small end of the roller. This improvement contributed tremedously toward better industrial design, lower cost and less weight.

Today's modern bearing Through all the years of its development the basic principle of full line contact between the rollers and races has never varied. However, alignment of rollers and races in in today's bearing is maintained by wide area contact of the rollers with the cone rib. The only function of the cage is to space the rollers. No other tapered roller bearing can match the Timken bearing for quality and precision and continued research at Timken assures bearing users that the No. 1 bearing for value will always be the Timken tapered roller bearing.
Next:  Deep groove ball bearings